If there's one shoe style that rules every summer, it's got to be mules. Whether they're adorning the feet of editors at fashion week, being slipped on for a city wedding or providing the perfect "smart flats" for the working woman, this is the style that keeps on giving. It might seem like the shoes have only shot to sartorial fame over the last few years, however, the reality is a little more historic. So what are mules and how did they come into being? And what are the best ways to wear them? Read on to find out more.

A Brief History of Mules

Although the etymology of the word "mule" dates back to ancient Rome, it wasn't until the 16th century that the Latin word was used to refer to backless shoes. Unlike the styles of today, the earliest mules were designed to be worn in the bedroom like slippers.

It wasn't until the late 17th that wealthy ladies of the French court—including Madame de Pompadour and Marie Antoinette—wore them out and about underneath their grand ball gowns. Jean-Honoré Fragonard's iconic painting from 1767, The Swing, depicts a young woman kicking off a pink-silk mule while gazing at a male admirer.

Fast-forward to the 20th century, where the '50s saw Hollywood pinups such as Marylin Monroe reignite the cult status of mules—specifically open-toed iterations she wore with high-waisted trousers and shift dresses.

And, of course, you can't talk about the history of mules without mentioning their resurgence in the '90s. From spangly peep-toes to pointed kitten-heel styles, mules became the shoe style that defined the decade. Were you really a celebrity in the '90s if you didn't own a pair? All we can say is long live Carrie Bradshaw.

Now that we've mapped out the history of mules, you might be wondering: What are mules? It might sound like a obvious question, but there's so much variety on the high street that it can be hard to pin down. Technically mules are shoes that don't have a back and are closed at the front. When it comes to the heels, however, there isn't a set height. Modern fashion brands have adapted traditional mules to cover a wide range of styles—from low heels with pointed-toes and high heels with rounded toes.

How to Wear Them

Personally I find that mules are one of the most versatile shoe styles—especially in the summer. Last year I bought a pair of beige H&M mules I’ve worn with literally everything. Don't believe me? Just check out my best high-street dresses shopping story. They offer the same elevation and polish as stilettos, but they’re so much more comfortable. When it comes to the fashion crowd, this season has been all about Balenciaga's Knife satin mules, a pointed kitten-heeled style spotted all over the streets of Copenhagen Fashion Week and worn with everything from miniskirts to boilersuits.

Clearly these boudoir-inspired shoes still hold the same allure as they did 300 years ago. Scroll down to see our favourite mule style inspo and shop our edit of mules.

Style Notes: Emily Dawes wears her while Marks & Spencer mules with a polka-dot dress. Perfect for a summer wedding.

Style Notes: Balenciaga's kitten-heel mules were everywhere at fashion week. Marie Hindkær styled hers with a red miniskirt and a pussy-bow blouse.

Style Notes: If you were wondering what shoes to wear with cycling shorts, look no further than Slip Into Style's chic ensemble. 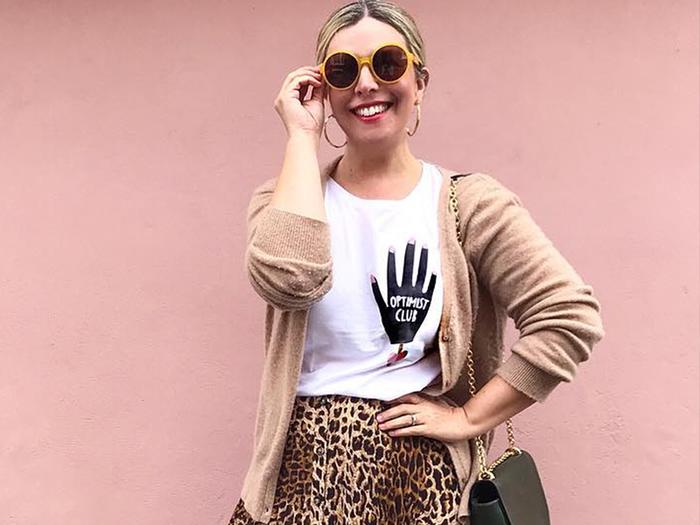 Up next: Here's how to make the brown-and-black trend work for you.