Often in fashion, looking back is as good an indicator of what to wear now as looking forward. In our eyes, circa-2004 Sienna Miller couldn’t put a sartorial foot wrong. We were as obsessed with the Brit icon’s credentials then as we are now. She essentially trademarked boho fashion: When she came on the scene, suddenly everyone wanted to copy her penchant for flowing skirts, floppy hats, wide belts and hippy waistcoats. She made a case for casual when a raft of A-listers were still dressing up in posh clothes for red carpet events.

If like us you’ve noticed the trend for such noughties classics as handkerchief tops and cowboy boots making a sharp return to fashion, you better believe Sienna wore it first. And you just know she’d be pairing her looks with minimal makeup and loose beachy waves, whether attending a festival or a film opening. Whilst you can undoubtedly chart her style evolution, some looks we swore must be current-day were actually from as far back as 2003. This stylish blonde doesn’t appear to age, and neither do her outfits. Keep scrolling to take a look back at some of Sienna Miller’s greatest fashion moments.

Sienna at the As You Like It after-party at Wyndham Theatre in London in June 2005. We’re making a prediction—the fabric belt is going to make a comeback. We love that Sienna worked it with another classic noughties trend, the bra top.

Here’s Sienna at the Keen Eddie premiere in May 2003 (no, we don’t remember that movie either). Sienna has said of this look, she was wearing “her mum’s vintage Missoni dress from the ’70s, and an old chain.” Hows that for relaxed red carpet dressing? Crochet is a must have for your summer 2018 wardrobe—whether it be a bikini, top of dress like Sienna’s. We’re sure Sienna started the trend.

Now we love this take on an LBD—anyone else getting Rejina Pyo vibes? Sienna may have been leaving Gerry’s in London back in 2005, but this look wouldn’t be out of place on any Friday night now. We believe she started the “black tights with everything” movement of the following year with this outfit.

Trends always come back around, and the dress-over-jeans look is just as covetable this summer as it was here in 2003. Sienna was at the Nick Harvey Society Archive in London—and if she wouldn’t mind, we’re going to be copying this look again some time.

Even at a formal event like the Polo (held at Windsor Great Park) back in 2005, Sienna manages to add a boho twist to her little black dress. The sparkly cardi, chunky bangle, white heels and layered necklaces really make this look. 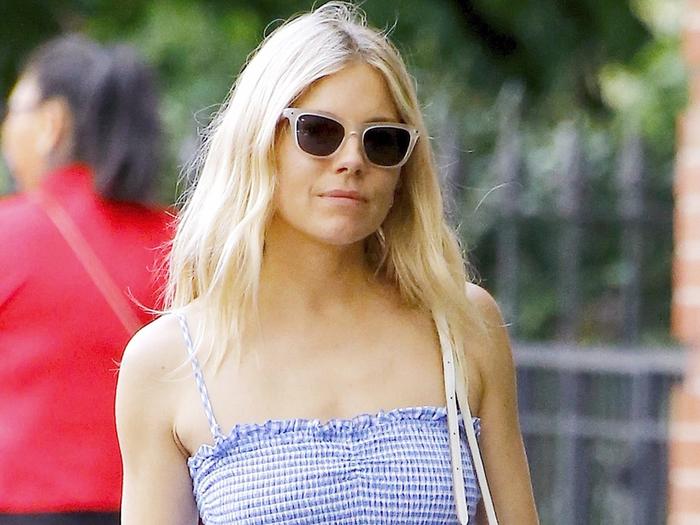 For the last night of As You Like It at the Wyndham Theatre in September 2005, Sienna wore this gold sequin Roberto Cavalli dress. So if you’ve got a metallic dress in your wardrobe, rest assured it’ll still look good in 13 years’ time, as demonstrated by Sienna.

Red + leopard print is a timeless combination. Sienna was at Bergdorf Goodman in New York to celebrate Twenty8Twelve, the fashion label she founded with her sister. This was back in 2007, but it feels only like yesterday.

We couldn’t believe this outfit is 12 years old—we want to wear Sienna’s Thomas Wylde dress right now, please. After showcasing this look in 2006 at the Independent Film Awards in Santa Monica, suddenly everyone wanted a floaty floral and a pixie crop.

You know when we talk about a designer handbag as an investment? This is the ideal case for that argument—Sienna’s Prada handbag, worn here in 2009 whilst walking with her dog in SoHo, would go with most of our outfits now. TBH, we could essentially lift this entire look. Striped shirt? Still cool. Skinny jeans? You betcha.

If Zara’s new-in section is anything to go by (and it is!), wide belts are back. Bonus points that Sienna’s is factored into her LBD. She wore the dress with over-the-knee boots to the Women to Women: Positively Speaking book launch at Kensington Palace in 2004.

Seen here in New York in 2009. Those Perspex shades, striped tank and white skirt are still perfect holiday attire, despite the nine years passing since Sienna rocked this look. Didn’t we tell you she defies age?

At her sister Savannah’s wedding in Devon in 2005, Sienna opted for a vintage floral midi dress. Not content with its already hippie-luxe look, she added a yellow waistcoat and a pendant necklace.

Sienna works a very mini minidress at The September Issue’s New York premiere in 2009. The blue shade of her Thakoon dress is still right on trend, perfect for a summer night out. Further proof that a good bag doesn’t date—this Bottega Veneta clutch is an eveningwear classic. 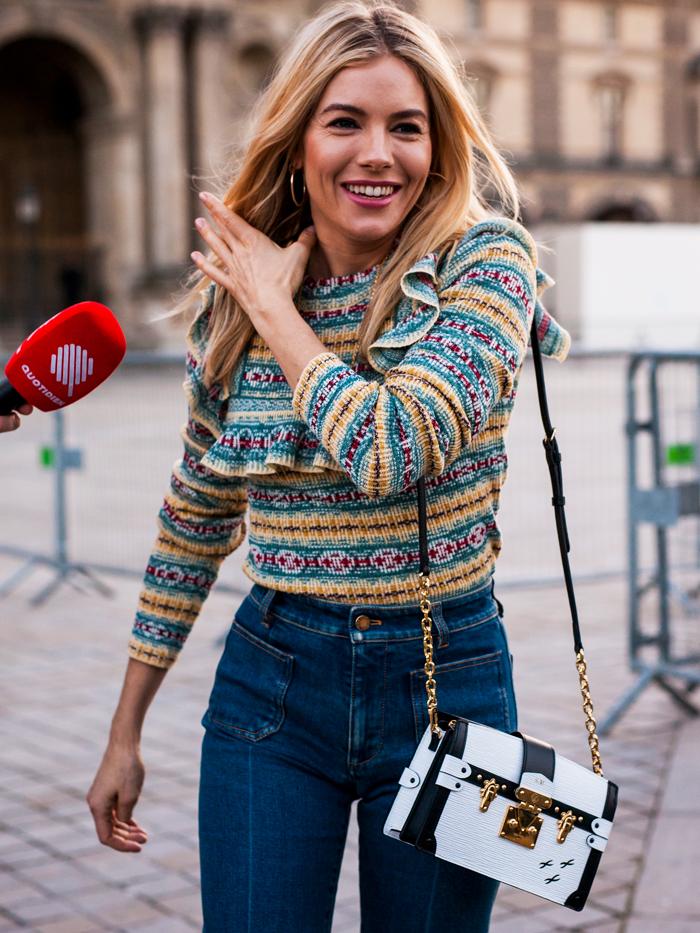 A Scott/Patrick McMullan via Getty Images

Sienna Miller at the after party for Factory Girl in New York back in 2007. The Edie Sedgwick film seemed to inspire Sienna (and everyone else) to go a little bit mod in 2007. This mohair jumper is made all the more powerful by the ’60s-style dark eyeliner and lack of skirt/trousers.

A spaghetti-strap slip dress—stylish in 2005 and stylish in 2018. This was Sienna's look to the Orange British Academy Film Awards at the Sanderson Hotel in London. Again, her seemingly signature chain necklace adds the finishing touch.

Here she is at a Fahrenheit 9/11 screening 2004 in London. For a cinema date, Sienna opted for jeans and mixed florals, topped off with a floppy hat. Across the country, thousands of Sienna-loving fashionistas cottoned onto the wide-brim hat trend Sienna sparked. Whilst Jude’s questionable top might have dated, Sienna’s ditsy florals haven’t aged a day.

One of our personal favourite Sienna moments, wearing a gold sequin minidress by Burberry at the Metropolitan Museum of Art’s Costume Institute Gala in 2006. The theme was “AngloMania: Tradition and Transgression in British Fashion,” and she was the guest of Burberry designer Christopher Bailey. We love that Sienna has always championed British style, setting the trend here for sparkling party wear.

Wearing an off-the-shoulder striped Calvin Klein dress in 2007. This was Sienna’s look for the after party of The Cinema Society and Calvin Klein's screening of Factory Girl. You’d believe us if we told you this was taken this week, wouldn’t you?

Another red carpet, another British designer look worn by our favourite style maven. This embellished Alexander McQueen dress was worn by the stylish blonde to the Los Angeles premiere of Cold Mountain in 2003. This is one of Sienna’s more romantic looks—we’re using it as inspiration for our next wedding guest look.

We suggest you make your wardrobe more Sienna-centric ASAP.