Everything You Need to Know About Olaplex's Most Popular Products

Olaplex: It’s the treatment that launched a thousand shiny, healthy manes—not to mention an entire lineup of at-home products that any beauty influencer worth their Dyson hair dryer knows and loves. Whether or not you’ve used Olaplex, you’ve definitely heard whispers of the treatment at your hair salon or have had a recommendation (or 10) grace your feed.

While everyone who has tried the treatment sings its praises to the tune of “Drivers License,” the question still remains: What exactly does Olaplex do? To answer all of your burning Olaplex questions once and for all, we spoke to Bianca Hillier, a colorist at Andy Lecompte Salon. Keep reading to get all the details straight from the pro herself.

Olaplex is a bond-building treatment that started as an in-salon service, usually done in conjunction with color to repair any potential damage. According to Hillier, so many clients were asking for an at-home formula to maintain the treatment that the brand met the demand by creating Olaplex No. 3 Hair Perfector—a one-step, take-home version of the now-infamous treatment, packed with the highest percentage possible of that secret ingredient doing all the heavy lifting.

Both the Olaplex in-salon and at-home formulas are powered by bis-aminopropyl diglycol dimaleate (say that five times fast), which is an amino acid complex that actually repairs the broken bonds in your hair shaft. “The structure inside of your hair strand is made up of disulfide bonds, which are connected in horizontal pairs like a ladder,” Hillier explains. “If you get your hair colored, do a lot of heat styling, or brush your hair really hard, those bonds get ripped apart and become single bonds, which latch onto oxygen. That causes the disulfide bond in your hair to create lactic acid, which eats away at the proteins and makes the strand weaker.” The bis-aminopropyl diglycol dimaleate in Olaplex’s formula is actually able to enter the hair shaft to realign and repair each of the bonds, resulting in soft, healthy, shiny hair.

As far as formulation goes, the in-salon treatments contain professional levels of bis-aminopropyl diglycol dimaleate, while the Olaplex No. 3 Hair Perfector contains the highest amount of the ingredient allowed in consumer products. Each of the other products in the Olaplex line contains the compound as well to maintain that bond.

WAIT, SO THERE’S AN ENTIRE FAMILY OF OLAPLEX PRODUCTS?

Oh, yes! The Olaplex range contains a full lineup of products designed to help maintain that bond. The in-shower options include the No. 4 Bond Maintenance Shampoo, No. 5 Bond Maintenance Conditioner, and the new No. 8 Bond Intense Moisture Mask. The styling items for post-shower use include the No. 6 Bond Smoother Reparative Styling Creme, and the No. 7 Styling Oil. Olaplex also has the No. 0 Intensive Bond Building Hair Treatment, which can be used as a prep step to the Olaplex No. 3 Hair Perfector. “You apply it to dry hair before you put on the No. 3 Hair Treatment,” Hillier explains. “It helps to fill in the holes within the bonds and maximizes the performance of the No. 3.”

HOW DOES THE OLAPLEX NO. 3 TREATMENT WORK?

Once you spread the formula from root to tip, the bis-aminopropyl diglycol dimaleate goes to work within the hair shaft to fix each of the broken bonds. “The ingredient is the only one that can actually repair the disulfide bonds in your hair, and while other companies have formulas that claim to do similar things, Olaplex is the only brand with the patent and the technology to achieve that,” Hillier says. Make sure to apply it to damp strands so that the formula can enter your hair shaft, and let it work its magic for at least 10 minutes.

WHICH HAIR TYPES WORK BEST WITH AN OLAPLEX TREATMENT?

Rarely does a product live up to the one-size-fits-all promises quite like Olaplex No. 3 Hair Perfector. While strands that regularly experience damage from color treatments or heat styling will see the most dramatic results, Hillier notes that all hair types and textures play well with the formula. “The treatment will make damaged hair feel healthier and less thirsty, but even if you don’t use heat styling or color your hair, you’ll still see results,” she says. “The formula is comparable for all hair types and textures since it focuses on rebuilding the bonds within your hair shaft and making it the healthiest it can be.”

HOW OFTEN SHOULD I USE OLAPLEX NO. 3?

Hillier recommends using the Olaplex No. 3 Hair Perfector once a week, but you can apply it as often as each time you wash your hair if you so choose. “There’s no way to overuse Olaplex No. 3,” she says. “Every time you style your hair or use heat tools on it, the bonds do get somewhat damaged, so the No. 3 Hair Perfector is a good way to maintain the health of your hair, and the more frequently you use it or longer you leave it in, the more benefits you’ll get.”

HOW SHOULD I APPLY THE OLAPLEX TREATMENT?

While the advised directions are to apply Olaplex No. 3 to damp, towel-dried hair and let it sit for 10 minutes before rinsing, Hillier notes that you can kind of tailor the method to fit your lifestyle. “If you’re one of those people who washes your hair once a week and you don’t want to go through the whole lather, apply, and rinse process, you can apply Olaplex No. 3 directly onto dirty hair and let it sit as long as possible,” she says. “The longer you can have it sit, the better because the Hair Perfector is going to keep working on those bonds until it dries.”

Regardless of your starting point, be sure to coat your strands from root to tip, let your hair drink in the goodness for as long as possible, and when you do rinse it out, be sure to condition afterward. While your hair will feel as if it's been conditioned, you still need to apply a conditioner post-treatment in order to seal the hair shaft, Hillier notes.

HOW LONG DOES A SINGLE APPLICATION OF OLAPLEX NO. 3 LAST?

Sure, a weekly self-care session with Olaplex is the move, but we get it—life happens, and sometimes we’ll go weeks between treatments. Luckily, a single application of Olaplex No. 3 Hair Perfector lasts up to 15 shampoos, and regularly using the No. 4 Bond Maintenance Shampoo, No. 5 Bond Maintenance Conditioner, and No. 8 Bond Intense Moisture Mask can buy you some additional time. 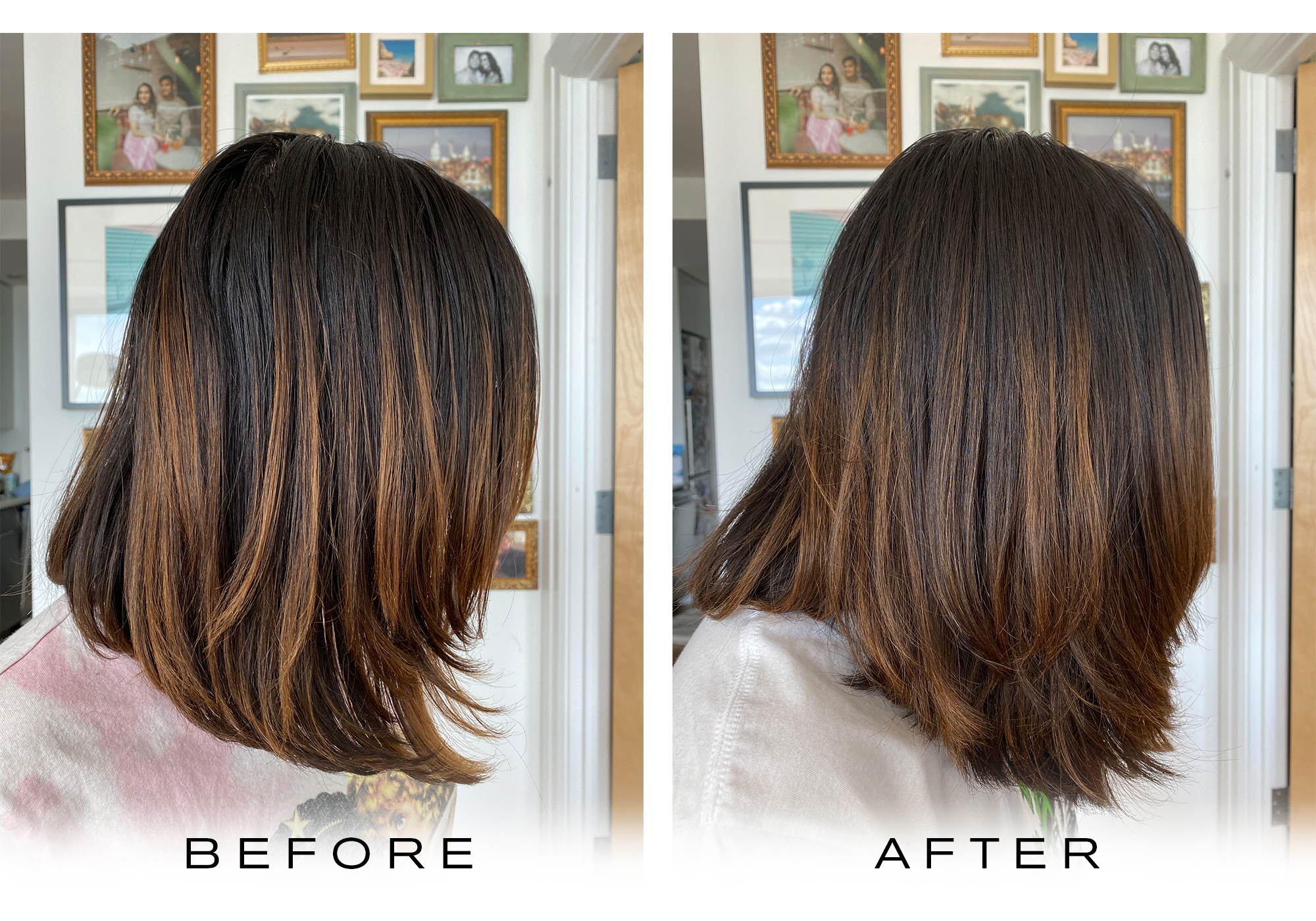 I’ve been using the Olaplex hair system for almost a month now on my thick, wavy hair and have absolutely seen a difference in how healthy my hair looks and feels. I have highlights (which are in dire need of a touch-up) and do a fair amount of heat-styling around two to three times a week, so my hair goes through its fair share of stress and damage.

Who was I before the Olaplex No. 3 Hair Perfector came into my life? It’s hard to remember a time before this staple existed in my lineup—it’s that good. After using the product consistently, I’ve noticed a major reduction in my frayed/split ends, a softer, more hydrated texture, and far less breakage than I used to experience. Somehow, the brassiness in my highlights was also toned down, and thanks to the smoother finish, my hair doesn’t take quite as long to blow-dry or style when I do decide to use heat tools.

The Olaplex No. 0 Bond Building Hair Treatment is a great first step to my Olaplex day of self-care. I apply the liquid to dry hair from root to tip, let it sit for at least 10 minutes, and then apply the No. 3 Hair Perfector over the top. While you can technically use the No. 3 Hair Perfector without the No. 0 Bond Building Treatment, I find that the No. 0 enhances the No. 3’s powers, helping my strands to better absorb the formula and resulting in a smoother, softer, can’t-stop-feeling-my-own-strands finish.

This is the most luxurious shampoo ever. The texture of the Olaplex No. 4 Bond Maintenance Shampoo is so lush I only need a quarter-size amount to cover my strands from root to tip, and it lathers like a dream.

The thick, creamy consistency of the Olaplex No. 5 Bond Maintenance Conditioner is perfect for my dry, heat- and color-treated strands. Even on the days I don’t use the Olaplex No. 3 Hair Perfector, the conditioner makes my hair feel just as soft and hydrated.

I typically like to alternate weeks of doing the Olaplex No. 3 Hair Perfector with the Olaplex No. 8 Bond Intense Moisture Mask to help keep those bonds in my hair strong and aligned. When I don’t have time to do the full treatment, the mask is a worthy substitute with its rich, creamy texture that spreads easily over my strands. I’m pretty lazy when it comes to washing my hair (it’s thick—what can I say?), so my signature move is to wet my hair in the sink, spread the mask on over it, tie it up in a bun, and go run errands while my strands drink in all the goodness.

Up Next: Truly Everything You Need to Know About Eyebrow Tinting