For me, putting on a bikini is already dancing dangerously close to public nudity. As someone who isn't averse to showing a little skin (but isn't particularly flashy either), I'm all for devoting myself to a flattering suit every summer. But I've never before entertained the idea of a skin-coloured suit. Now I'm rethinking things, and it's all thanks to Bella Hadid.

The model was on holiday wearing a skin-coloured string bikini by Storm, and for the first time, I liked the idea of just leaning into the nakedness. While matching your suit to your skin tone isn't necessarily a new idea (any glimpse at the past Yeezy shows immediately proves that fact), this year there's something satisfying about the idea of choosing a suit that manages to convey nothing and something at the same time.

There isn't anything gimmicky or overtly eye-catching about a flesh-tone suit. But at a time where we're championing the fact that our bodies aren't objects of the male gaze, I can choose to wear a suit that exemplifies the fact that I'm comfortable in my own skin. And now, as brands work toward creating a more inclusive idea of what a "skin tone" suit actually looks like, it's possible that we all can sport a nude suit.

So though I know at first the idea of going full-on nude can be intimidating, my hope is that you find the same curiosity I do in trying a trend that, though appearing simple, can say a lot.

With an added bow for fun.

Pair with crisp linen trousers for that beach-to-bar look.

Channel a vintage vibe on the beach with this bikini.

A high-cut leg is a must-try swim style. 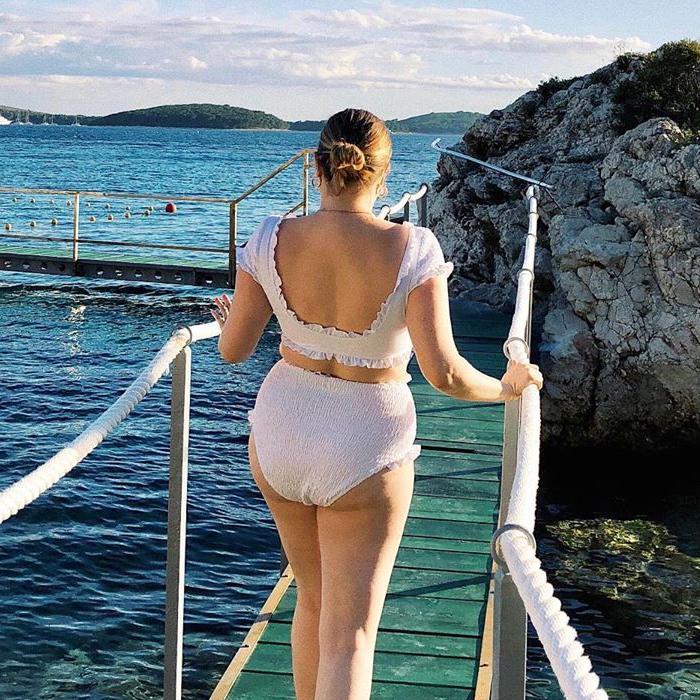 It's easy to imagine a day by the pool in this suit.

The cutout detailing is super flattering.

Sheer panels add a bit of spice to a simple one-suit.

Now that you have your new swimsuit, all you need is a sun hat.