Meghan Markle’s jeans have, quite unsurprisingly, become a bit of a “thing”. Kate Middleton had her nude pumps, of course, most notably from L.K.Bennett, which quickly became her royal style signature and sold out at every restock. Then there are the Jenny Packham dresses. But the Meghan Effect’s core component appears to be in the jeans.

Naturally, we’re just as enamoured with Meghan’s overall style as everyone else right now—those sleek silhouettes, the belted coats, the handbags. But when it comes to sellout status, it turns out that we’re a fashion pack obsessed with good denim—and the stats prove it.

The soon-to-be-royal’s favourite denim brand, Mother, revealed that traffic to its retail site soared by an incredible 200% after Meghan wore the label’s ankle-skimming jeans on her first public outing with Prince Harry. Similarly, Welsh denim brand Hiut Denim has had to up sticks and move to a larger factory just to keep up with the increase in demand that followed Meghan slipping into a pair of its black skinnies for a Royal visit to Cardiff.

Allegedly, jeans are “discouraged” by the guardians of the Royal Family dress code, but that may well be adding to the appeal of Meghan’s wardrobe staple right now. She’s worn them proudly on several, albeit fairly low-key but no less official engagements already, and it doesn’t look like her love for denim is about to quell.

What’s really propelling the Meghan Effect, however, is the way the star manages to add polish to every jeans combo. From a retro bootcut to a skinny to a distressed detail, Meghan’s styling elevates every outfit from “just jeans” to an elegant look worthy of cult following. So how does she do it? And more importantly, where is she shopping for those jeans? Keep scrolling—we’re about to break it all down. 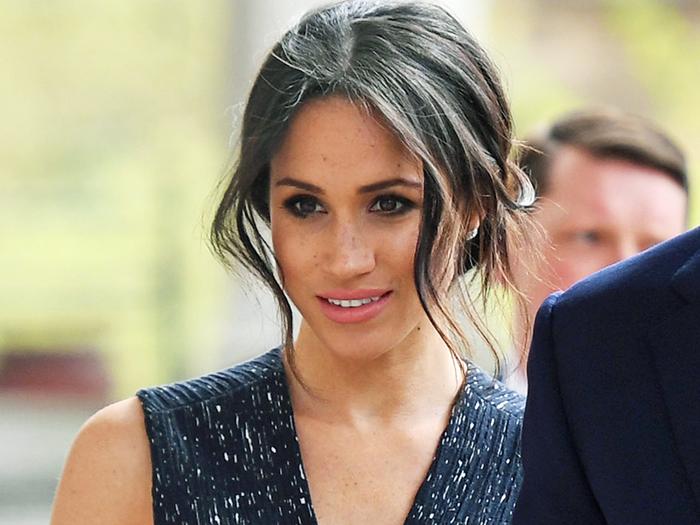 The white shirt–and–denim jean combo has long been a classic, but with this look at the 2017 Invictus Games—her “relationship debut” with Prince Harry—Meghan made it iconic. To re-create the magic, opt for jeans that have just a hint of distressing—just the one ripped knee rather than two, for example—will keep things from feeling too casual, while a slightly oversized shirt will help to give it that effortless feel. Finally, finish with sleek tan pumps rather than sandals to keep things feeling polished.

Mother reissued this limited-edition cut following huge demand from Meghan fans. Though it’s already sold out again, you can get in line thanks to the pre-order service at Revolve.

Another Invictus Games event, another pair of Mother denim jeans—we told you it was her favourite brand. To keep the bootcut from looking dated, keep your fit sleek like Meghan and team with an elegant heel or sleek boots. The khaki trench coat is a particularly chic finish here.

As per the Meghan Effect, these jeans are hard to get your hands on, so get your name on the waiting list ASAP.

Meghan debuted her new favourite pair of black skinnies by Welsh brand Hiut Denim while on a Royal visit to Cardiff. To keep things feeling smart, the actress finished the look with a wide-necked jacket in a classic check print by Theory, velvet black ankle boots by Tabitha Simmons and a splash of colour thanks to her green mini top-handle bag by Demellier London.

We’d argue these are contenders for the ultimate wardrobe staple. Soft, fitted and with just enough give, we’re not surprised Meghan snapped up a pair.

Next up, 17 ways to look as polished as Meghan Markle.