In television series like Sex and the City and Gossip Girl, the costumes are arguably as important—and revealing—as the dialogue. The Upper East Side of the 2010s wouldn't have been the same without Blair Waldorf's headbands, coloured tights and blazers. She is certainly conservative and stays loyal to Ivy League signatures such as pearl earrings and pretty handbags, but that doesn't mean her style didn't evolve—she never wore the same headband twice. If Gossip Girl were still going, there are 11 items that we are certain Blair (or should we say Dorota?) would add to her wardrobe because somehow—despite the fact that they weren't hugely on-trend at the time—they've come back around into fashion.

There are tweaks, of course. No one could pull off a fully, madly accessorised and layered look quite like everyone's favourite RBF-girl, Blair.

From double-breasted blazers to a Shrimps pearl handbag, keep scrolling to check out what this Upper East Sider would totally wear again in 2018.

Basket bags were an essential part of Blair's Hamptons wardrobe, so in 2018, she would bring them to the city too and wear the structured basket bags by either Gucci, Mark Cross or Loewe.

Carrying on from being hugely popular in 2017, double-breasted, checked blazers are still going strong. They were an essential part of Blair's uniform, although today you'd be more likely to wear yours with jeans and a tee rather than clashing prints and cute accessories.

Blair Waldorf would probably be one of Alessandro Michele's most loyal customers, as the Gucci bow printed shirts, top-handle handbags, loafers and colourful tights and socks are so Blair.

One of Blair's most memorable Met-steps outfits is the blue striped sleeveless dress by the brand Co-Operative Designs that she wore to a coffee-and-drama debrief with Serena, and she'd certainly be into tailored rainbow stripes like the below Mary Katrantzou skirt.

Blair Waldorf loves pearls, and she'd be the first to snap up one of Shrimps' pearl Antonia handbags.

6. A Beret In Every Colour

Even if you've only watched one episode of Gossip Girl, you'll know that Blair loves her headgear, and this season, she'd swap her headband for a beret.

Blair will never be a girl who wears black and navy, as she always plays with bright colours, so she'd most certainly approve of this season's bold suits. We think she'd have one in red, pink, yellow and baby blue.

We'd strongly advise you ignore everything else in this double whammy of a photo and just focus on Blair's shoes: her elaborate kitten heels are so 2018. Although, saying that, the queen has really been bringing back the headscarf this year too. 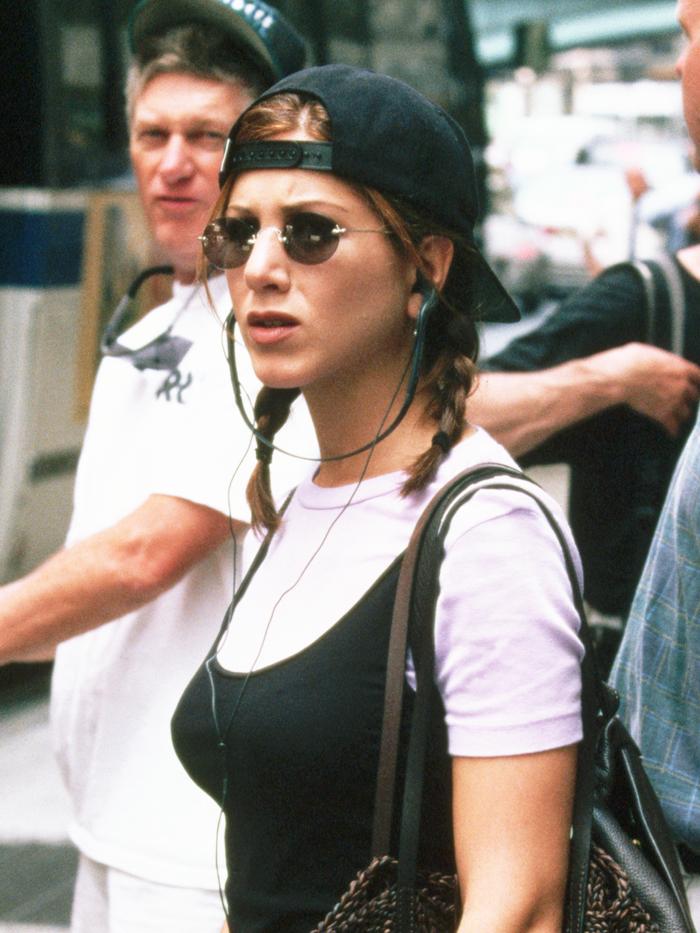 Blair had a huge bag collection that ran the gamut between practical school tote to the more sublime and ridiculous—like this heart handbag. It just so happens that this year is all about the novelty mini bag, so it's time to take them out of storage, Leighton.

Imagine the kind of '90s Ghost dresses you once wore—they came back for Gossip Girl and now they've returned another decade later.

Thanks to an influx of Scandi girls wearing hair accessories Blair's, many headbands now appear to be back en vogue. Maybe ditch the blow-dry in 2018?

Next up, the all-important A/W 18 trend report.