Kim Kardashian West's net worth is astounding. As the fifth most-followed person on Instagram in the entire world and belonging to one of the most famous families she’s so famous, in fact, that the media have dubbed the Kardashian-Jenner clan “America’s First Family.” Riccardo Tisci once likened her fame to that of Marilyn Monroe, claiming she was at that time, the most photographed woman on earth.

Kim Kardashian West is undoubtedly one of the most recognisable women across the globe today. And she’s also one of the richest: according to a recent Forbes article KKW is reportedly worth a rather cool $350 million—a whopping increase from the $175 million she was previously estimated at. Last year, she was ranked as number 47 in the Forbes celebrity earnings list—one of only six women that featured in the top 50. (Just so you know, Beyoncé was number 2 and Adele was number 18.) With her multiple streams of income Kim is richer than Taylor Swift, Tom Cruise and Jay-Z. KKW essentially makes $959,000 per day—that's $666 per minute or $11 every second, in case you were wondering. And if your jaw has already dropped, let us tell you about the fact that her younger half-sister Kylie Jenner is worth even worth: Forbes estimate the 21-year-old cosmetics guru to be valued at $900 million.

One of Kim's most recognisable—and copied—Instagram posts of 2018 so far.

No one can deny the level of fame Kim Kardashian has achieved since the mid-2000s when Keeping Up With the Kardashians turned them the family into a household name. But just how has the wealthiest Kardashian made all her money? Last year, the family signed a new contract with E! For a further five seasons of KUTWK. Between them, they get paid $30 million per season. Out of all the siblings, Kim gets the highest cut, and reportedly gets a $5 million bonus if Kanye appears in an episode even for five minutes.

But Kim is a savvy entrepreneur and has capitalised on her TV fame with a series of products and endorsements. Somewhat surprisingly, she makes a ton of cash from tech. In 2014, she released the Kim Kardashian: Hollywood game, which has been downloaded more than 45 million times and reportedly accounts for 40% of her annual income. The app, which is free but offers in-app purchases that can cost anything from $4 to $40, generates around $70 million of revenue every year. Kim personally nets 30% of the earnings.

Since then, Kim has unveiled the Kimoji App. When it launched in 2016, it was raking in $1 million dollars per minute, with The New York Post reporting that more than 9000 users were downloading the $2 app every second. Kim took to Instagram to announce its release, and soon after, increased traffic crashed the Apple site. Her book of selfies, Selfish, retailed for $10 and sold 14,000 copies in its first week.

Her KKW Beauty line also generates a fortune and has overtaken her gaming endeavours to become her #1 source of income. When she launched her contour and highlighter kits, 300,000 units flew out in just three hours, which translates to a cool $14.4 million in sales. The KKW x Kylie Cosmetics lip kits, which retailed for $45, also promptly sold out—this time within minutes—earning her $13.5 million in sales. Kim has also expanded her beauty offering to include fragrances: Crystal Gardenia, which was released in November and made $10 million in its first day. What’s even more noteworthy is that all of the sales came from online. So powerful is the KKW name, that customers are willing to splash out $60 on a fragrance without even knowing if they like the scent. Last year, she also launched The Kids Supply clothing line with Kanye, with prices ranging from $16 to $250. 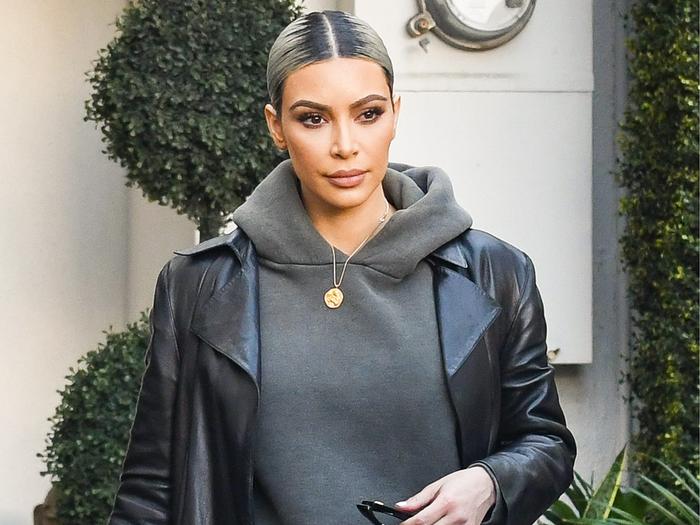 Naturally, Kim takes to Instagram to boost her income. She does many sponsored posts—from more predictable ones like Calvin Klein and juice cleanses to anti-morning sickness tablets. Brands reportedly pay up to $500,000 for a single post. And just this year she has joined yet another major business list for these business ventures: Forbes' roll call of the most successful women entrepreneurs in the United States sees Kim sit alongside her sister Kylie as well as women such as Oprah, major American business owners, leaders in tech and more.

Kim in her Calvins—just one of the #ad brand she's working with right now.

The fact is that Kim makes about £8 in the time it takes you to open your eyes and switch off your alarm in a morning. Now isn't that something?