Given the fact she played the role of one of the most fashionable characters ever to grace the small screen for 10 years, it's little wonder that Jennifer Aniston's personal style has been somewhat overlooked as Rachel Green's inevitably took centre stage. This, however, is an oversight we're hellbent on rectifying.

Having hit the big time in 1995, Jen was catapulted into the spotlight during one of the most fashionable decades, though it wasn't long before she began to make her mark on emerging trends. From spaghetti straps to square toes, Jennifer became of the era's style darlings, and we'd gladly wear any of her '90s looks today.

Fast-forward to recent years and Jennifer Aniston's style is still going strong. Just look at her impeccable red carpet streak circa 2015, where she blazed couture trails in Gucci, John Galliano and Saint Laurent.

Indeed, there's so much more to Jennifer Aniston's style than little black dresses and her failsafe jeans and tank top combination. Keep scrolling to see for yourself.

Style Notes: If there's one thing Jennifer knows, it's the power of simple styling, which she displayed from the moment she came onto the scene in 1995.

Style Notes: Looking party-perfect in 1995 in a floral-slip-and-shoulder-bag combo.

Style Notes: Looking the epitome of '90s cool in red devore velvet dress. We'll take those shoes while we're at it, too.

Style Notes: Fast-forward to 1999 and Jen was busy dressing down sequins with sea salt–sprayed hair at the Oscars.

Style Notes: Giving us a masterclass in black attire, finishing with square-toed boots that feel so now (even though this snap was taken in 1999).

Style Notes: Another '90s premiere, another slip dress—and is that a Madonna-inspired cross necklace we spy, too?

Style Notes: Finally, a shot of off-duty Jen from 2001. The suede coat, the snake-print boots, the short bob… we dig it all.

Style Notes: Picking up an Emmy in 2002 for her role as Rachel in Friends, after which beige layered dresses would become an integral part of her red carpet roster.

Style Notes: That's right—Jen was wearing your favourite straight-leg jeans and a nice top in 2002 before it was even a thing. 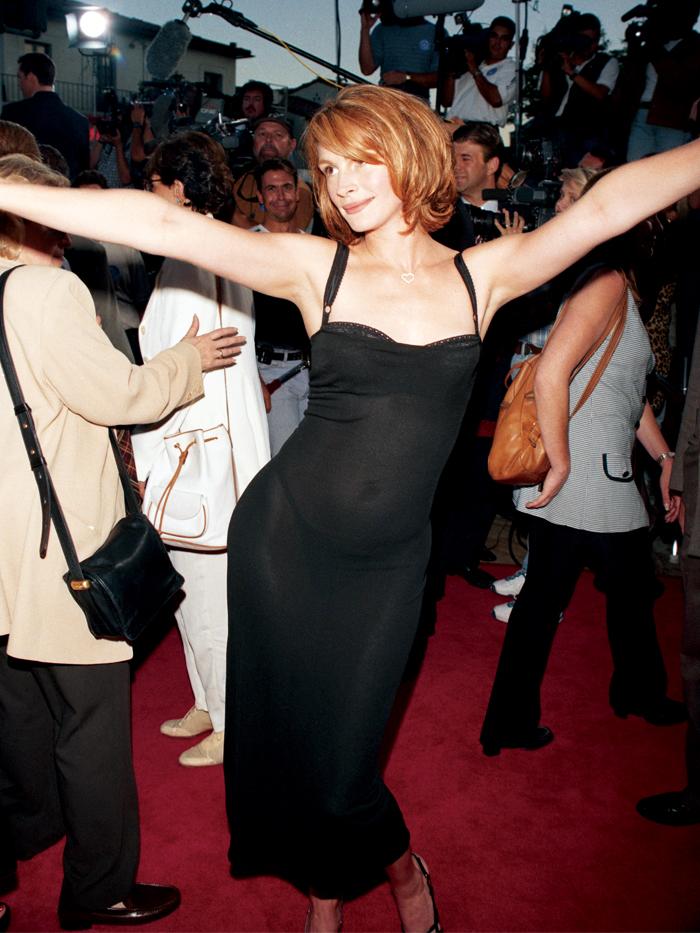 Whatever the Trend, Julia Roberts Did It First and Did It Better
Read Now

Style Notes: With then-husband Brad Pitt at Cannes Film Festival in 2004, Jennifer proves that sometimes less is more in the glamour stakes with her Versace gown. She's also making us consider buying into halter-necks again.

Style Notes: Throwing a fashion curveball in a red prom dress at the premiere of Along Came Polly in 2004, Jen proves it's good to try something new once in a while.

Style Notes: This sheer embellished dress is everything. It's just a shame she hid it underneath her coat.

Style Notes: No one could resist the allure of the waterfall cardigan in 2005—Jen included.

Style Notes: This is Jen at her after-dark peak. Of course, she gives this statement dress her own cool spin with her undone locks and minimal makeup.

Style Notes: We rarely see Jennifer in shorts, but we like it when we do (like here in 2006)—especially when they're worn with strappy mules.

Style Notes: Kickstarting her obsession with flared suiting in 2009, Jen accessories her co-ord with beaded necklaces, a box clutch and a sleek ponytail.

Style Notes: Keeping the necklaces, Jen taps her inner boho with this Burberry column maxi dress for the premiere of Marley & Me in 2009.

Style Notes: Jennifer is the definition of a bombshell in this metallic Prada minidress, complete with a cupped bodice. In fact, it's not too dissimilar in silhouette to the chemise she wore in an episode of Friends.

Style Notes: Sticking with the minidress theme, Jennifer looks chic in 2010 in a bouclé version she wore with a gold watch and peep-toe slingbacks.

Style Notes: This Valentino couture dress was made for Jennifer. Quite literally.

Style Notes: Giving good flamenco style in this Christian Lacroix gathered dress at the French premiere of The Bounty Hunter in 2010.

Style Notes: Showcasing her incredible physique in this Valentino bandage-esque dress. Seriously, is she even real?

Style Notes: At her perfume launch in 2011, the occasion definitely called for tangerine Vivienne Westwood.

Style Notes: For the London premiere of Horrible Bosses, Jennifer switched up her penchant for structured dresses in favour of this flapper style by (yep, you guessed it) Valentino.

Style Notes: Back to her preferred structured frocks, Jen looks incredible in this subtle pep-hem monochrome dress, which she finished with classic courts.

Style Notes: Keeping things elegant in a floral midi dress for her Hollywood Walk of Fame star unveiling in 2012. Naturally, she chose Chanel to mark the occasion.

Style Notes: Proving dresses cut close to the body are her thing in this fabulous light-blue dress from one of her favourite designers, Vivienne Westwood, which she wore to Toronto Film Festival in 2014.

Style Notes: Looking the red carpet part at the 2013 Oscars in her floor-sweeping Valentino dress, which she styled with a matching box clutch and her signature glossy locks.

Style Notes: Looking like a pin-up in this Dolce & Gabbana lace pencil dress.

Style Notes: Embracing her flirty side at the 2015 premiere of her film Cake in a floral minidress from Giambattista Valli, which boasts scallop detailing, a sweet bow neckline and jacquard finish.

Style Notes: Suits really do, ahem, suit Jennifer, as this Gucci tuxedo proves. This look from the 2015 Golden Globes has to be up there as one of our Jen-An favourites.

Style Notes: Forgoing a ballgown in favour of a slinky John Galliano dress from his archives for the 2015 SAG Awards.

Style Notes: For the 2015 Oscars ceremony, Jennifer looked every inch an A-Lister in her intricately beaded Elie Saab Haute Couture dress. Moments after this photograph was taken, she proceeded to lift up Emma Stone. In couture. We really do love you, Jen.

Style Notes: Much like her hair, Jen's Anthony Vaccarello blazer dress—which she wore to the 2016 premiere of her flick Mother's Day—is sleek beyond measure.

Style Notes: Bringing the party to the 2017 Oscars after party in this statement Versace sequin dress, which featured a plunging neckline and thigh-high split. This can only be described with one word: babe.

Style Notes: Demure and elegant, we adore Jen in this Proenza Schouler dress, which she donned in L.A. toward the end of 2017.

Style Notes: Jen shows she's still as sartorially savvy as ever, effortlessly shoulder-robing her tuxedo jacket over her vest top and wide-leg culottes. Gorgeous as per usual.

Style Notes: For the premiere of her new flick Dumplin' in December 2018, Jennifer wore a sequin minidress and the same pair of strappy mules from 2006. Jen, we bow down.

Next: As well as Jen's style, we still very much appreciate these Rachel Green–inspired trends…