We're approaching ankle boot season, and while there are many shiny new pairs of shoes to hold our gaze, a handful of iconic styles still remain at the top of any self-respecting shopping list. Ankle boots, to me, speak of versatility, practicality and being worn into the ground—a perfect pair will be scuffed to death a decade later, carrying many great outfit memories to the cobblers as you get them fixed for the umpteenth time.

Cassie Smart, MatchesFashion.com's buying manager, shoes and bags, agrees. The store is celebrating the most iconic, still-available ankle boots of all item—working with the brands in question to create special, exclusive versions as well as ensuring that they have the old favourites in tow. It's called its Greatest Hits project, and as far as no-regrets purchases go, it's a safe space indeed.

"Greatest Hits is a great way for the customer to buy into a style that may have sold out the first time due to the storming success from the runway," Cassie says. "Other styles that play on the greatest hits trends and what we have bought into this season are the Maison Margiela Tabi boots, as well as the definitive Isabel Marant Dicker boots, Chloé Susanna and the cult Balenciaga cutout boots.

"We love the Vetements disco star boot that was originally an exclusive to us a couple of seasons ago and saw a sell-out success, so we have bought back into this style for A/W 17. Similarly, when we launched the sock boot with lighter heels, these sold out within two weeks of coming in."

So without further ado, let's take a trip down memory lane and revisit the most iconic ankle boots of all time—that you can still buy now.

Style Notes: The first Vetements collection from 2014 feels as fresh and influential as ever, and since that debut offering, the lighter-heel ankle boots have remained a mainstay, alongside the oversize outerwear and reconstructed denim. Reworked iterations include the sock-boot pull-on finish, as well as many new colourways, prints and "lighter" options.

Style Notes: In 2011, there was basically nothing cooler to own—Acne's twist on the classic cowboy boot could be spotted swooshing around the globe via its signature tasselled zip. This ultra-comfortable boot is still in stock for those girls who didn't invest first, second, third or 50th time around, and it has become a modern classic in its own right.

Style Notes: In 2011, Balenciaga's sci-fi cutout Ceinture boots could also compete as the hottest ticket for fashion editors everywhere—skip forward five years, and two creative directors later (they were introduced during Nicolas Ghesquière's time, then came Alexander Wang and now Demna Gvasalia), and these chunky but beautiful boots are still just as sought-after. Once upon a time they were called the Apron boots—we still can't get that name out of our heads.

Style Notes: Formerly known as the Susan boots when they first launched in 2008, Chloé's studded Susannas were a favourite of Sienna Miller (she had them in red), and they were like gold dust when it came to buying a pair. Competition is still strong, but fortunately, there are now more colourways and a more regular influx of stock to meet demand. 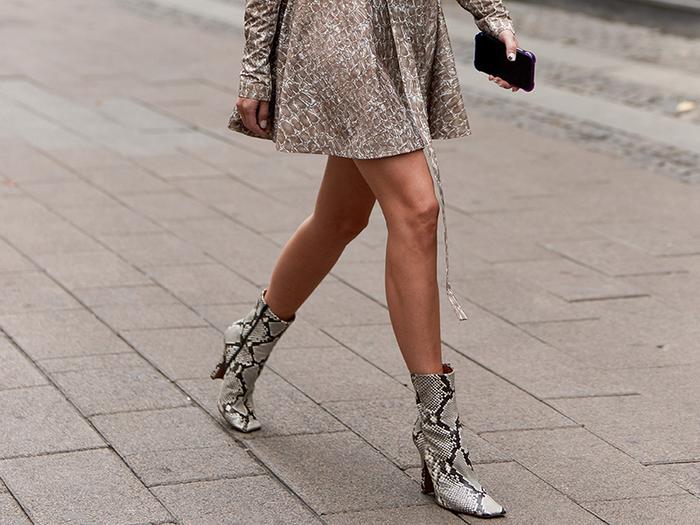 Style Notes: Can you see a theme emerging for comfortable, flat-ish ankle boots with buckles? Japanese label Toga shot to fashion fame, thanks to a street style–adored footwear launch in 2012 led by these wear-everywhere boots. They've since been reinvented with more radical detailing (think PVC straps and cutout fronts), but you can still easily pick up a versatile pair in black suede, for example.

Style Notes: Perhaps the most divisive, iconic and established of the bunch is Maison Margiela's Tabi ankle boots. First designed in 1989 by the brand's founder, Martin Margiela, these were inspired by Japanese split-toe socks and have been used as the base for many an adventurous shoe from the avant-garde fashion house. With their mid-height cylindrical heel and supply of knowing winks from insiders, these are nothing short of a clever investment.