From Jane Fonda's iconic workout leggings (combined with leg warmers, of course) through to Sienna Miller and her many layered boho looks, there's been no shortage of moments during the past century where stretchy pants have played an integral role in women's wardrobes. However, whether at the gym or in the office, leggings continue to be a contentious style topic. Some love them—and are probably buying this particularly super-popular style from Topshop. Some loathe them—and are most likely trying to not get their head around the etiquette of wearing jeggings or leggings outside of a hangover at home.

Leggings have had their high moments (Sandy in Grease), but they've definitely waded through some lows (following a boom in the mid-noughties, cheap iterations took over the streets and the unaware semi-opaque knicker-flashing offended many a passer-by). But we bet you didn't know just how old and how significant leggings really are. "From the middle of the 16th century, knitted silk stockings became available—initially imported from Spain and later made in England," explains fashion historian Amber Butchart. "These were very expensive, luxurious items, and were often made in bright colours—a symbol of wealth and prestige."

There's no denying this divisive jersey trouser is staging something of a high-fashion comeback now—from Valentino to Versace, Bella Hadid to Pernille Teisbaek, they are being worn on a regular, completely legitimate basis. Not since the 1980s have they been quite so prevalent, but it makes sense when one considers that wellness and fitness are the pinnacle of personal luxury right now. "The 1980s were, of course, a key decade for leggings, buoyed by the popularity of sportswear in fashion, and the idea of a 'gym body' became incredibly popular," said Butchart. "Again, it can be seen as a type of conspicuous consumption—you can afford the time and money to attend a gym."

There are ways of dressing them up galore, and we've noticed an increase in the hybrid creation of treggings, which are far more suitable for the office. But what of the most iconic legging moments of all time? We've enjoyed a trip down memory lane to bring you some of the best legging moments ever. Go through the gallery to see them…

Style Notes: Audrey Hepburn's all-black-everything has made for the chicest leggings combination to date, don't you think?

Style Notes: This is a look from Betsey Johnson's runway collection—a getup that would've no doubt been seen bending and flexing in Studio 54.

Style Notes: Has anyone ever looked quite so sassy in leggings? Olivia Newton-John was reportedly stitched into these skin-tight pants on the set of Grease and has forever since set the bar for fancy dress costumes of the most alluring variety.

Style Notes: In the late 1970s, Jane Fonda's famously honed-and-toned physique became something of a commodity in itself. The actress became a fitness icon and created cult workouts for other women to copy. Not only were leggings key, but so were leotards, belts and leg warmers.

Style Notes: It's the '80s, and Madonna is the queen of the decade's most outré fashion choices. Don't be distracted by the oodles of jewellery and the back-to-front denim jacket, it's the leggings that played just as much of a part in her closet.

Style Notes: Same year, different capital. Punk ruled both New York and London, but here's a Brit girl giving off some rather foxy vibes in a pair of leopard-print leggings. We're yet to revisit this idea, but with the '80s showing up in fashion circles, the time may be near.

Style Notes: Can you even guess which major designer created this star-dusted trio? Marc Jacobs! 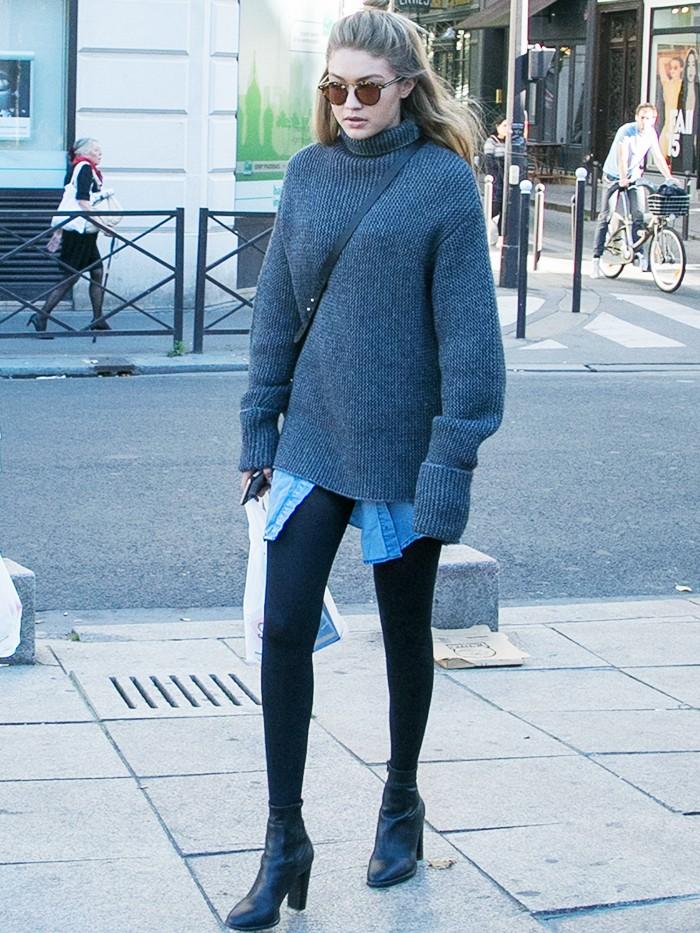 Style Notes: The popularity of leggings continued well into the 1990s, and women started to get more sophisticated in styling terms. This fashion shoot proves it: Who would've thought to add a roll-neck, chain belt and knee-boots?

Style Notes: The costumes of Patricia Arquette in True Romance have spawned many a copycat look from hipsters over the years, but we'll always have these pink leggings marked indelibly in our brains.

Style Notes: Is that the new Vetements campaign, you say? Nope, it's the late Princess Diana on a skiing holiday in Austria. Her off-piste vibe is so 2016.

Style Notes: There are Kate Moss signatures going on all over this snap, but she still wears cropped black leggings to date—and still with a blazer. Only these days she's swapped out the ballet pumps and pashmina for heels and a skinny scarf.

Style Notes: One doesn't imagine leggings as the linchpin to boho, but during the mid-noughties, they really were a layering tool extraordinaire. Sienna nailed the mood with her platforms, hippie headband and low-slung belt. 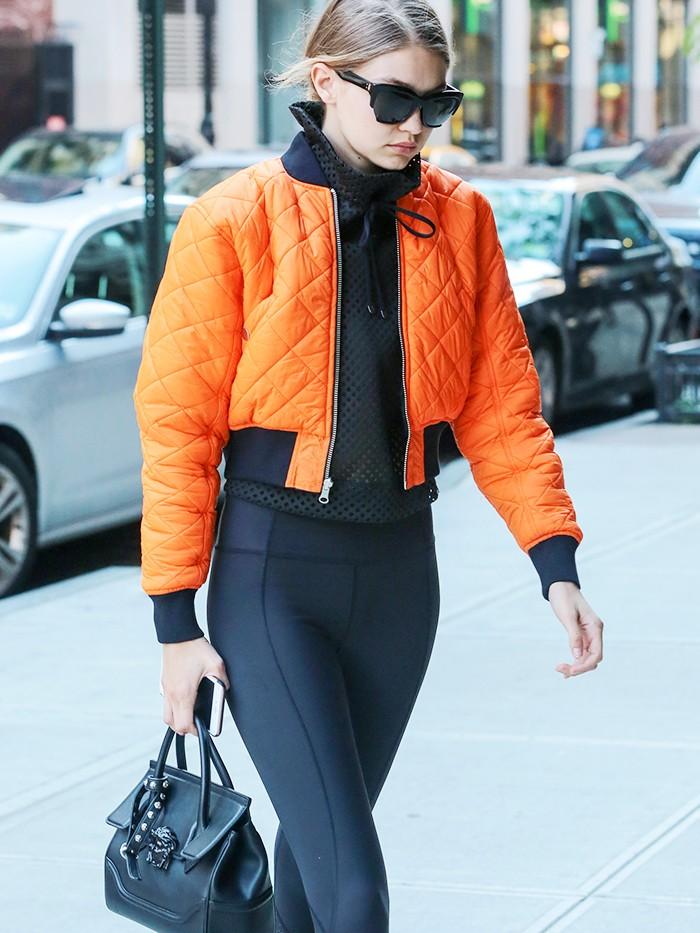 Style Notes: Victoria Beckham has channelled 101 different characters, but this jolie madame–meets–sports luxe ensemble was just the ticket for a Chanel show, non?

Style Notes: Of course Olivia Palermo was first on the leather-legging train. Here she is looking entirely current almost a decade ago (and now she's inspiring us all over again).

Style Notes: Oh, how we loved the irreverence of Agyness Deyn. This was a time where leggings were cast into fashion Siberia, but the British model threw them back into the ring with added punk spirit.

Style Notes: It's thanks to the likes of Gigi Hadid that leggings have found their way back into the closets of the fashion savvy. Naturally, none of hers are basic cotton jersey but high-spec, sucking-in athelisure versions. Streamlined enough to wear confidently out and about 24/7.

Style Notes: Recognise that silhouette? Yes, it's Kim Kardashian West. She has been instrumental in bringing the leggings-and-tee look into the here and now. Not everyone will favour a corset as the key update, but at least high heels help up the ante for everyone.

Style Notes: Tailored stirrup pants have found their way back onto the streets, and most importantly at fashion week. Here's stylist Rachel Wang showing you how it's smartly done by modern girls.

Style Notes: Elena Perminova swiped Valentino's balletic collection straight from the runway onto the streets, making nude leggings the more directional choice for those keen on the idea.

Style Notes: These Kenzo x H&M leggings have been perhaps the most talked-about over the past week or so since the brand launch it's insanely popular collab. Charlie XCX does them justice with her equally madcap outfit.

Style Notes: Okay, technically this is a picture from 2016, but Versace's S/S 17 collection included so many pairs of leggings we can only predict this trend will continue to boom.

Style Notes: Leggings have become the on-duty uniform of many a fashion editor channelling the sports-luxe vibe of brands such as Vetements or Gosha Rubchinskiy—Miroslava Duma is a particularly noticeable advocate.

Style Notes: Balenciaga has taken the trend a step further and combined over-the-knee stretch boots with leggings. They're already proving to be popular among A-listers, and we expect the street style crowds to pick up their "pantashoes" at any moment.

Style Notes: Leggings are, of course, the very backbone of the Hadid sisters' general wardrobe, but this year Bella introduced the rather controversial nude legging trend, and we're still wrapping our heads around it.