Ahh, hair bobbles. These unassuming pieces of elastic might seem harmless, but it turns out that the mere mention of them in a Who What Wear brainstorm last week was enough to get pulses racing—and not in a good way. In a frantic five-minute discussion, we covered everything from whether it’s gross to constantly wear a hairband on your wrist (germs!) to what the rules are when it comes to matching your bobble to your hair colour.

That feeling when your hair bobble has ruined your shot.

I left the meeting feeling, quite frankly, highly anxious at the sight of the black hair band that lives near-permanently on my wrist and desperate to get answers to all of our pressing hair band queries. Here’s every thought we—and probably you—have ever had about hair bobbles, but haven’t wanted to verbalise until now…

Yes—that's me, my mum and my hair bobble.

From street style shots for Instagram to wedding guest snaps, there’s nothing like a forgotten hair bobble on your wrist to ruin a great photo. In fact, even if you have the inclination to remove it just before you get camera happy there’s always that tell-tale imprint left on your skin—the memory of hair bobbles past, if you will.

Our tip: Lose the wrist bobble and stash spare ones everywhere you can think of instead. Your handbag, desk drawer, heck, even your bra will do—just keep those bobbles out of sight or prepare to do some nifty photoshop editing to make them disappear.

I spy with my little eye… a hair bobble.

We hoped this one was more of an urban myth, but it turns out that back in 2015, there were reports of a poor woman whose glittery hair bobble rubbed a scratch on her wrist that turned into a major bacterial infection. We caught up with Consultant Dermatologist Dr Justine Kluk and asked her to, literally, dish the dirt on grimy hair bands: “It’s not surprising to hear reports that old hair bands might harbour bacteria if they have been sitting in the bottom of a handbag, swum in, slept in and carried around on our wrists,” she told us.

The good news, though, is that she thinks this leading to an infection would be rare—although not impossible. “[The risk] is pretty low if you have a robust immune system. It would make sense for hygiene reasons to keep them [your hair bobbles] in rotation or change them every few weeks or months,” Kluk advised.

Hands up if you always buy the same pack of skinny black hair bobbles from Boots when all of your hair bands have disappeared to, well, wherever it is that socks and kirby grips disappear to. Surprisingly, it turns out that the reason there are beige, brown and black ones available is that your hair band is supposed to match your hair colour. My hair is pretty dark brown, so I’m hoping that I’m not committing any major beauty faux pas by wearing black bobbles.

My top tip? Next time you pull your hair up into a ponytail, twist a strand of hair around your bobble to disguise it entirely. Not only will it hide the colour, but it will also look chic. 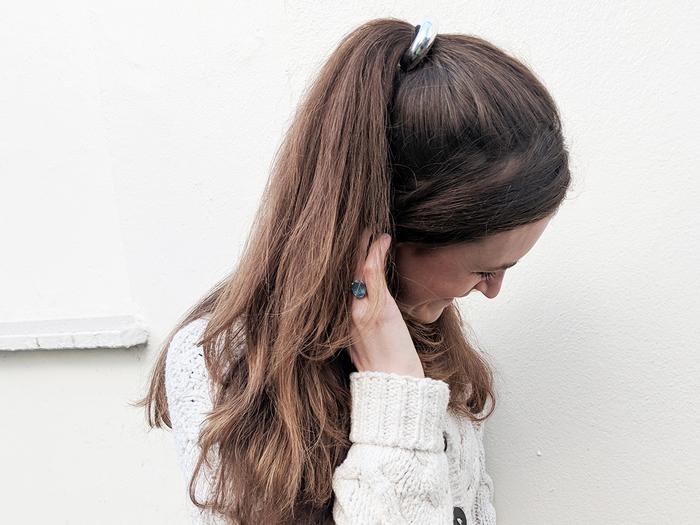 This Surprising 30-Second Hairstyle Suits Everyone I Know
Read Now

4. SHARING IS (MAYBE NOT) CARING

At least a wrist hair bobble means you can ponytail on the go.

I might be old before my time, but at nearly 30, I don’t frequent nightclubs too often these days. However, on a recent night out at a very overcrowded bar, I found myself sweaty and loose-haired in the ladies toilets. Earlier, I had lent my perma-wrist hair bobble to a friend after some frantic dancing to “Sweet Child O’ Mine” (yes, I really am old before my time), which meant it was time for some hair-band crowdsourcing.

Thankfully, girls are super willing to share their hair bobbles, which meant I was offered two in mere moments: first, a blonde one, then a brown one offered by another lady who clearly already knew about the hair-matching rule.

Is it gross to use a stranger’s hair band to get your strands off your face? Probably. But when it’s rapidly approaching midnight on a Thursday, I’ll take it.

In the market for some fresh hair bobbles? I thought so! Here are my favourites to shop now…

Next up, this bra-size calculator is a thing of genius.