If you had told me three years ago that Hailey Bieber (née Baldwin) would become one of my style muses, I wouldn't have believed you. Initially making red carpet appearances alongside her A-list dad, Stephen Baldwin, the model has always had an interest in fashion, but her uniform of choice was less "fashion girl" and more "Cali-girl" (think biker jackets and ripped jeans), which isn't exactly my vibe.

However, it seems as though Hailey has had a bit of a style reinvention over the last 12 months, and the fashion world has certainly taken notice. She hasn't totally traded in her cool-girl edge, but as she's entered her twenties, she has swapped denim cutoffs for stylish co-ords and skintight dresses for androgynous tailoring. The overall effect is seriously high-fashion and suitably grown-up. Highlights include an oversized checked suit paired with a neon pink roll-neck and a head-to-toe cream ensemble, featuring white jeans and crew-neck knit. In short, she is killing it right now.

While browsing our favourite Hailey looks, we noticed nine key pieces that crop up again and again—all versatile staples that will work hard for you over the coming months. We also realised that you can re-create her whole capsule via our favourite high-street store, Arket. From chino trousers and knee-high boots to blazers and neon shirting, scroll down to see and shop the pieces that make up Hailey Baldwin's capsule wardrobe.

Style Notes: Now this is how to pull off the neon trend. A sober checked suit balances out the brightness of Hailey's bright roll-neck. So chic and grown-up.

Style Notes: I've been looking for a good pair of beige trousers for ages now, and I'm taking my inspiration from Hailey's high-waisted wide-leg pair, which look so good with sneakers.

Style Notes: We might be heading into summer, but a pair of knee-high boots will serve you season after season. We love how Hailey has used hers to elevate minimalist separates.

Style Notes: The luxe loungewear trend shows no sign of abating, and this outfit shows us how to make it work. Our takeaways? Firstly, go tonal, and secondly, style with a smart jacket.

Style Notes: Skirt co-ords are all over the high street this season and are an easy way to experiment with double denim. There are plenty of classic washes around, but we only have eyes for Hailey's green-hued two-piece. 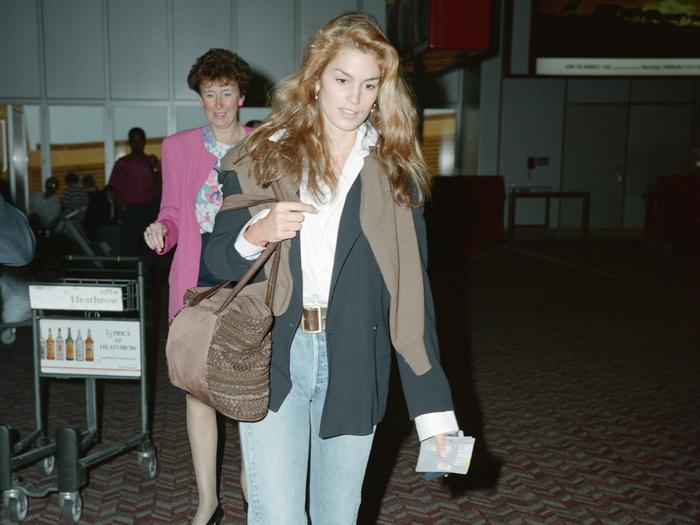 Style Notes: Yup, beige-on-beige is still up there with our other fave "low effort" styling tricks. Make this pairing work for warmer weather with a light bomber and beige tank top.

Style Notes: Okay, so not everyone will want to re-create this exact outfit (bare legs and all), but we're so into the model's choice of oversized neon shirt for the evening. Get the look with Arket's green iteration.

Style Notes: I know it's a bit weird to be obsessing over someone's gym outfit, but there's something about Hailey's leggings-and–puffa-jacket combo that has caught my eye. It can be tricky to find something both practical and chic to wear to and from classes, but this might just be the answer to my prayers.

Style Notes: If you're wanting to get into the spring spirit but it's still chilly outside, make like Hailey and chuck on a pair of white jeans and colour-match knit. They'll also look great in summer with a white tee and tan sandals FYI.

Up Next: The 7-Piece Jeanne Damas French Capsule Wardrobe