If you had told me 10 years ago that dresses and trainers were 2019's ultimate combination I would never have believed it. It's the sort of look I would usually associate with 11-year-old girls—an age where you want to wear a dress but somehow practicality trumps the desire to look girly, so you pull on a pair of comfy trainers and you're good to go. But perhaps it's this feeling of childlike abandon which has brought this unexpected outfit formula to the fore this season—the desire to embrace sartorial awkwardness (cycling shorts, anyone?) and throw the idea of traditional, grown-up sophistication out the window.

After Chanel sent its models down the runway in haute couture gowns and trainers back in S/S 14, the brand got the ball rolling for a look that has continued to grow in popularity ever since. This summer, in particular, has seen dresses and trainers shoot to the mainstream, and interpretations have come in all varieties: from classic Supergas paired with a slip dress à la Monikh Dale to more punk-inspired ensembles, such as Hannah Anderson's polka-dot dress and Converse high-top look. Whatever your style, you're bound to find a pairing that you'll fall in love with. It's hard to imagine a world without this being the norm. Scroll down to discover and shop our favourite dress-and-sneaker outfits.

Style Notes: ASOS's dramatic yellow midi has all the makings for a fab wedding guest dress, but we love how Ellie from Slip Into Style has worn hers with a pair of old-school Hi-Tech trainers.

Style Notes: Tie-dye is everywhere this season, and Zara's blue maxi, in particular, has seen Insta-success. Style yours with chunky sneakers and a bucket hat à la Anna Cornelia.

Style Notes: Flatform sneakers are the minimalist girl's answer to "dad" trainers. Paired-back but by no means boring, this style will pair perfectly with your new gingham mini. 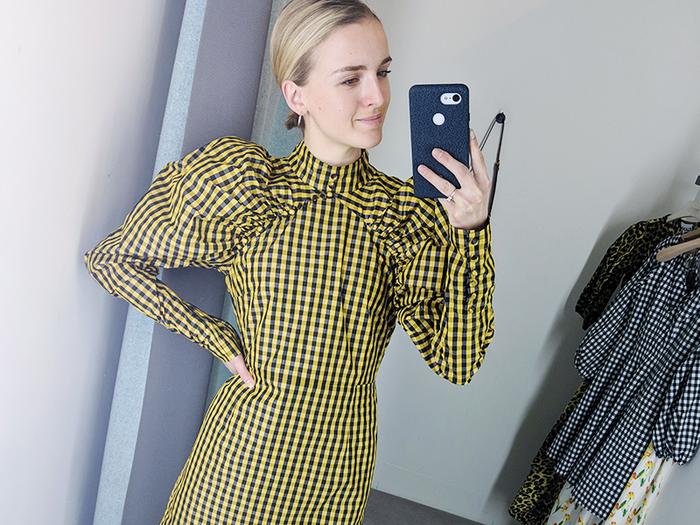 I Tried on Over 50 Dresses, and These Are the Only Ones That Matter
Read Now

Style Notes: I've been obsessed with this pairing of a checked midi and sneakers for weeks now and can't wait to re-create it when the weather warms. If you can't afford the Tibi original, there are plenty of checked alternatives on the high street right now.

Style Notes: Jeanette Madsen toughens up a powder-blue dress by brand of the moment, Ganni, with a pair of Adidas trainers.

Style Notes: There are some definite punk vibes in Hannah Anderson's outfit that consists of a polka-dot dress and Converse high-tops. Definitely a look for colour lovers.

Style Notes: A pair of chunky Nike trainers perfectly grounds this frilled gingham number. Proof that trainers can work with minis too.

Stye Notes: Monikh Dale's chic ensemble is ideal for those who are slightly scared off by this season's chunky trainer trend. Superga offers the same effect but with a more understated finish.

Up next: Five trends that will never go out of style in London.