It turns out I've been a bad, bad girl. But no naughtier than Princess Diana, because she too decided to wear red to a wedding. It's a question the British public googles up to 1000 times per month‚ and until speaking to an etiquette expert this week, I had never known the official line or concerned myself with the matter when it came to choosing my own wedding-guest outfits for the many nuptials I've attended over the years.

Princess Diana in a red printed dress and matching accessories for a wedding in 1981.

Although fashion search engine Lyst has predicted that hot pink will be the colour many stylish guests choose to wear this wedding season, the allure of the little red dress has held strong in fashion circles over the past few summers. In its most vibrant, flouncy forms, many influencers, editors and more have been seen imitating full flamenco-emoji looks like a standard summer practice, and that includes taking the señorita vibes to weddings both overseas and on home turf.

Around five years ago, I wore a red carnation-dotted dress to a wedding in Spain, and it didn't appear to cause any friction. Moreover, my best friend wore a fabulous off-the-shoulder lipstick-red midi to my wedding a few years back—also in Spain—and it didn't bother me one jot. From my personal experience (and watching others make this decision on numerous other occasions), I assumed this old-fashioned taboo had washed away along with many other traditions surrounding the Big Day.

Tish Weinstock wearing a red flamenco dress and sneakers to the 2017 nuptials of Greta Bellamacina and Robert Montgomery.

Oh, how wrong I was. "Wearing red, whilst giving off different connotations, is as questionable as wearing white to a wedding," explains Isobel Kershaw, a leading figure at The British School of Etiquette and the fashion expert behind personal styling company The Stylist London. "The first consideration is what type of wedding, the themes and the venue. If the wedding is in winter, darker berry tones are perfectly acceptable, however for summer ones, the red tones are less acceptable."

Why so? It's all thanks to the history that the colour red carries: "Red can be seen as the most sexy, confident and striking of colours, and therefore female guests choosing to wear the hue could be seen as a tad disrespectful. After all, no one should try to outshine the bride!" True. However, I do believe there are more demure shapes and silhouettes that can soften the idea of wearing a bold red dress. If you avoid anything slit on the legs or with too short a hemline, and steer clear of showing major cleavage or donning anything too tight, I think you're in safer territory.

There are, however, some official etiquette-approved exceptions to crafting a red ensemble. "The acceptable considerations may be wearing the yellow-based tones of red in a print," says Kershaw, advising that one should steer clear of a block-colour power-red (which is more blue-based) dress or suit, or consider adding red accessories to a look in a different colour.

Of course, should the idea of red be "on theme" for the nuptials or wedding you're attending, then it's entirely acceptable. I put the question out to our audience via Who What Wear's private shopping group on Facebook (join So… Should I Buy This? here), and the feedback was mixed. One user highlighted one very important situation where this would be frowned upon: at a Chinese wedding. Traditionally, the bride will wear red, and it would be considered in poor taste to follow suit. Some couldn't quite pinpoint why it didn't feel right to do but agreed it was best avoided. However, for the majority, the sentiment was that so long as it's not a white or cream look you're turning up in, red is entirely fair game.

Demi Moore in a burgundy shade for Meghan and Harry's wedding last year.

The best advice we can offer up? Just ask the bride if you're unsure. I would say that it's more offensive to wear something ultra-revealing or too casual than opting for a shade of red. So if you're set on sticking to this part of the rainbow, keep scrolling to shop for red dresses that look the part…

So chic with flats.

A very good bridesmaid option, if you fancy your girls wearing red and bucking tradition entirely!

Can someone just invite me to an Italian wedding already? 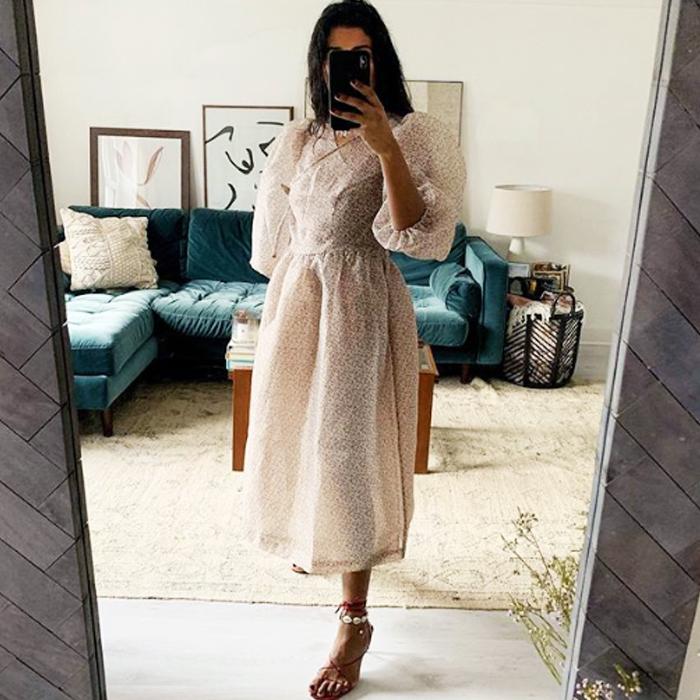 Yes, this would totally outshine the bride, but I had to include it!

Great for an evening do.

I'd add a belt to this to elevate the simple shape.

I adore a dress with an interesting back.

A rare find that can look just as good dressed up with heels and jewellery as it will with sneaks and a cardigan.

You could pass this off as vintage.

Next up, the coolest wedding guest outfits for 2019.