From Charlotte York on Sex and the City to L.L. Cool J and Britney Spears, almost everyone had a bucket hat by the end of the '90s. Though originally designed at the turn of the 20th century as the durable sidekick for fishermen, it's most culturally associated with the era when Oasis was at the top of the charts and mobile phones were starting to catch on. (Shout-out to my old Nokia 3210!)

Given how pervasive they were, it's hard to believe they were parked by the fashion set by the mid-noughties in favour of Von Dutch caps and giant hair poofs. Shortly after the turn of the millennium, bucket hats were basically only worn by children, not fashion icons. But as millennials grew up, the demand for bucket hats returned, and over the past few years, bucket hats have evolved from an ironic comeback trend to bona fide fashion hat of choice.

With approval from all aspects of fashion culture—from Hypebeast followers to Scandi influencers—it's now one of the most commonly spotted accessories at fashion week. Even luxury brands like Gucci, Ganni and Prada are releasing multiple versions of the style, and many high-street stores are following suit.

If your idea of wearing a bucket hat was simply donning a vintage Kangol or recoiling in horror, perhaps it's time to think again. Like any ascending trend, the more popular it is, the more options we have. This summer, we've already spotted the bucket hat being worn in different patterns, textures and styled in so many ways it almost feels like there's a bucket hat look for anyone's personal style. So much so that even the biggest bucket hat haters (some of which exist in the Who What Wear office) are starting to come around… Keep scrolling to see how our favourite style stars are wearing the trend in 2019 and to shop the bucket hats we love most.

Style Notes: Straw buckets are the latest childlike nostalgia piece to go big. They even have the Jacquemus approval. Like beaded bags and Laura Ashley dresses, these hats take us back. Oh, and they go with everything.

Style Notes: Prada (who recently announced they are switching to recycled nylon—yay!) is responsible for the '90s nylon craze and recently reissued the classic styles.

Style Notes: A bucket hat with a wider brim—also known as the picnic hat—is popping up all over our feeds this summer. Blanca Miró's brand, La Veste, makes super-cute ones in gingham colours.

Style Notes: All-white outfits are the quickest and easiest way to keep the chic during summer. Cap off your look with a white bucket hat.

Style Notes: Green gingham is everywhere right now, so why not give it the try as the accent to your outfit? If that's not your thing, opt for tie-dye, leopard print or Burberry checks.

Stuck in a Denim Rut? Try One of These 13 It Skirts Instead
Read Now
Burberry
Vintage Check Cotton-Canvas Bucket Hat
£250
Shop Now 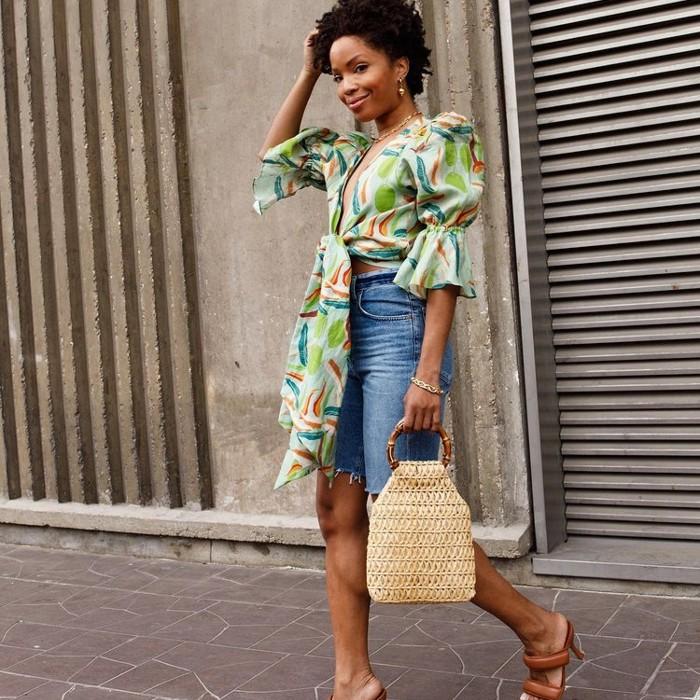 21 Summer Outfits We Love for All Kinds of Weather
Read Now
6. Go sheer.

Style Notes: Fashion's love for organza this season has made sheer fabrics the chicest choice for summer 2019. Practical? Probably not, but we don't care.

Style Notes: Tonal outfits are another easy styling trick, and tying the look together with a bucket hat is the fab way to give this outfit formula a 2019 twist.

Style Notes: Accessories are the best way to take bold new colours out for a test-spin without having to fully commit. A high-street bucket hat is a great place to start.

Style Notes: Keep the rest of your outfit as minimal as possible and let your accessories do all of the work. See what accessories you own—printed or plain—and find the hat to match. For next-level matching, let your socks in on the fun.

Up Next: The Complete Capsule: 11 Summer Essentials for This Season's Hot Weather