Unless you’ve been walking around with your head in the clouds, the fact that the ’90s are back and more visible than ever won’t have escaped you. Ongoing logomania means we’re constantly scouring Vestiaire and rummaging through our storage boxes for all things branded. Previously worn as a status symbol by It girls like Paris Hilton and Nicole Richie, we now also have the added bonus of nostalgia too. Right now on Vestiaire, Dior’s logo bags (especially the saddle ones) are trending alongside quilted leather Chanel bags, Gianni Versace’s baroque motifs and chunky Hermès necklaces—so far, so logo.

The 1990s and early 2000s, for many, was about rejecting the subtle and opting for garishly branded merch. “Juicy” was splashed across the butts of track pants worldwide, often in rhinestones, LV was monogramed onto mini baguette bags brandished with pop art cherries and earlobes were adorned in double C Chanel earrings.

In the here and now, Gucci has been advocating the revival since Alessandro Michele’s debut as the creative director for A/W 15. Alessandro has given new life to the once-neglected double-G motif, prompting the fashion flock to return to overtly branded bags and ultra-popular logo belts, as was the preference way back when.

For those looking for the most accessible way to wear this trend, the logo belt has become a real—and hugely versatile—frontrunner. Even Meghan Markle—she of the most minimalistic and elegant style—is into it, sporting a Givenchy black logo belt at her first royal engagement with the Queen to the opening of the Mersey Gateway and again to the Royal Ascot with Harry. But her neat take on the trend is a million miles away from the more brash or streetwear-led options that are taking up outfit space in other parts of the fashion world.

Meghan’s look shows the potential for a subtle nod to the logo trend, pairing her sleek Givenchy belt with a minimalistic dress each time. For casual-wear, double up on the ’90s and pair straight-leg jeans with a leather logo belt and vest or tee. If you’re looking to move this trend right into 2018, designers like Balenciaga, Off-White and others have been splashing their branding on brightly coloured fabric belts designed to be wrapped around the waist several times.

Have a scroll through our edit of the best designer logo belts around.

Very popular in black but also excellent in white.

We love this print. 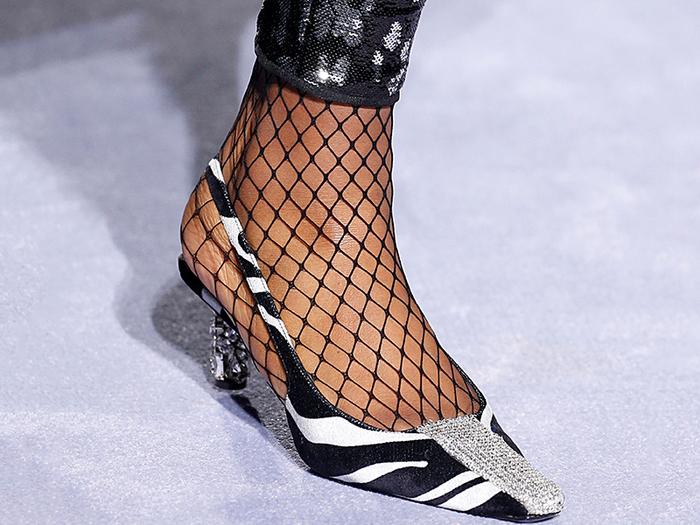 Who wouldn’t want this classic?

If you want to channel Meghan herself.

The NR is new to the street style scene.

These are constantly selling out.

An oldie but a goodie—girls still love Moschino belts.

This is from the men’s department, but who cares?

Add to a blazer.

And it’s reversible, so it’s a wise cost-per-wear option.

Into how chunky this is.

Check out our guide to the biggest trends of A/W 18.