Some people dream about the perfect wedding dress. As for me, I used to dream about owning the perfect trench coat—namely one of Burberry’s iconic designs. Don’t get me wrong: I did love my actual wedding dress, but honestly, I’ve not looked at it in six years since I wore it. My trench coat, which I bought from Vestiare Collective a year after I got married, however, has been worn countless times (and I always get compliments on it). In fact, I wore it when I interviewed for my role at Who What Wear, and it was given an approving comment. (I’m still convinced it helped me get the job.)

The reason it’s such a great investment is that it goes with everything in my wardrobe. Plus, they never change—they’re almost identical to when they were created 100 years ago. Which makes sense: It wasn’t designed with fashion in mind. Much like other garments now considered timeless (jeans, bomber jackets, etc.), it was created out of necessity. The British army needed coats that were more lightweight but weather-resistant, and thanks to Thomas Burberry’s discovery of waterproof gabardine cotton in 1879, the designer was approached to create the new coats for the army. The garment was then worn throughout World War I by soldiers fighting in the trenches (hence the name).

Trench coats being worn in the ’60s.

Soon after, trench coats were translated into civilian life as returning soldiers wore them outside of wartime. Then came Hollywood stars wearing them on film⁠—Humphrey Bogart famously wore one in Casablanca, as did Audrey Hepburn in Breakfast at Tiffany’s. The ’60s, however, are when style started to overtake function. The Burberry coat became a true fashion item, with features such as the D-ring and storm flap becoming more of a statement.

Today’s classic trench coat has barely changed in terms of look, and is still very much true to its heritage DNA. That said, under Christopher Bailey (the former creative director) and Riccardo Tisci (the current designer), the trench coat has been reimagined plenty of times. From Bailey’s patent trench coats to Tisci’s first runway show for spring/summer 2021 featuring the classic coats spliced with denim and in bold sunset orange, there's always a new take on the look.

Right now, you can invest in the classic or find one that suits more directional tastes. Keep scrolling for the Burberry trench coats of the past and the season's looks, then shop my edit. 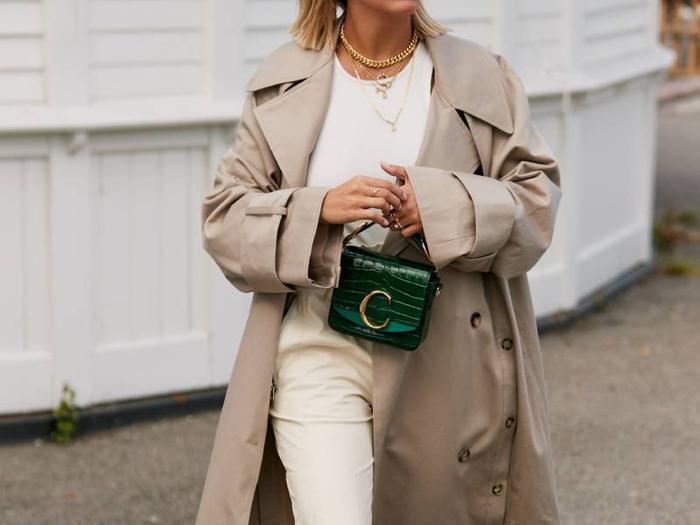 This Is the Only Trench Coat I Own, and I Always Get Compliments on It
Read Now

While my preference is always a beige trench coat that falls just below the knee, there are so many different styles that make it a winner for everyone’s taste. Keep scrolling to shop an edit of the best Burberry trench coats right now.

Shop My Edit of the Best Burberry Trench Coats

Next up, the biggest spring/summer 2021 fashion trends to know.