We're fully convinced we'll have your support in the fact that just because party season is officially over doesn't mean we can't buy new heels, right? Right. Now we've cleared that one up, we think it's time to introduce to you a new (old) shoe style that's doing the rounds on Instagram, being bought in bulk at vintage shops and filtering into designer collections across the globe. You may have spotted it recently, or you may have flashbacks of them from the first time round in the '90s and '00s. Either way, it's all about the simplest slip-on mules Sex in the City's Carrie Bradshaw once approved of. She may have been more commonly spotted in her Manolos, but clicky-clacky mules were never far away.

The Carrie way to wear is by colour co-ordinating top-to-toe.

They have the innate ability to make you look more dressy whilst also giving you all the nostalgic feels of trying on your mum's heels for the very first time. With the backing from names including Stella McCartney, Rupert Sanderson and Miu Miu and the new, more cult brands including Rejina Pyo, By Far and Neous getting on board, it's clear to see these SATC-worthy heels are here to help us put our best (very fashionable) foot forward for 2019. Scroll down to see and shop 15 pairs of editor-approved mules.

These fluffy fancy slipper-type Manolo Blahnik mules have got Carrie written all over them. Courtney adds them to her minimal Jacquemus dress for a high-low look we're taking note of.

Sparkly vest top, satin trousers and slip-on mules… how very '90s. We spy nails in one of this season's key green shades too—round of applause for Stephanie.

Your decision just got harder. These also come in glossy gold.

Can you get any more perfect than pink Prada heels? No, didn't think so.

These will go with everything you own.

So shiny, so chic.

They're a sure-fire way to jazz up any pair of jeans.

We can imagine these with an oversized '80s-style blazer.

The most elegant pair of heels you'll ever own. 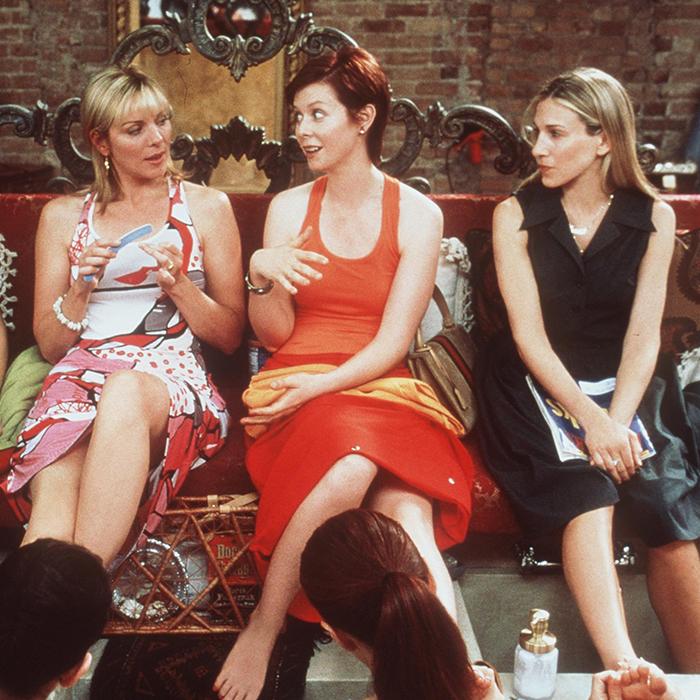 We can always trust Neous to create new It shoes.

Carrie and Cinderella could do a time share on these.

We can't get enough of the new Rejina Pyo collection—full stop.

Spice up your usual "straight-leg jeans and tee" combo.

Everyone will ask you where you got these.

Shoe crazy? See the 21 shoe brands everyone should know.