I'm a huge fan of '70s fashion—the era created a host of trends that still stand up today, whether you realise they're from that time or not. Think of our current obsession with bright over-the-knee boots, folk-inspired printed dresses, velvet and corduroy, boho blouses, midi skirts and so on. While the '70s sweep over the runways every couple of seasons, there's always a hint of it on the streets if you look closely.

Think of the iconic designer names that were indelibly marked into history during this decade, like Yves Saint Laurent, Karl Lagerfeld and Diane von Furstenberg. Also, during this period, mass-market, trend-driven fashion was more readily available. Barbara Hulanicki's Biba kick-started the idea in London a decade earlier, alongside boutiques such as Bus Stop, and cool, connected girls were able to switch up their looks more readily, which likely led to the 1001 aesthetics and key pieces that came out of this electric time.

This glamorous period also produced a slew of unforgettable, high-octane, high-profile style icons. Think Farrah Fawcett, Grace Jones, Bianca Jagger, Diana Ross, Cher and Debbie Harry. Their fabulousness was met in equal parts by the casual '70s crew: Ali MacGraw, Diane Keaton, Jane Birkin and company repped the kind of '70s style that feels more brunch-ready in NYC rather than wild nights at Studio 54. Whether you're into hippies, disco queens, rockers, punks or retro nerds, I'd recommend following @70sbabes on Instagram for a daily dose. What you'll notice when looking through these archival shots is that so many retro fashion moments still feel relevant. Keep reading to see which 40-year-old trends we're still wearing today.

Jackie O's '70s style (particularly on this holiday in Capri) is for all the minimalists out there. I love the simple vacay look topped off with a headscarf—a styling trick we've noticed recently on Instagram.

I'm a big fan of Princess Anne's style archive, and this is one of my favourite looks. From the jumbo floral print to the balloon sleeves and shirred bodice, everything about this is very 2021.

Style Notes: Right now, pearls are all over everything, but this is one jewellery trend that pops up every decade without fail. In the '70s, it was all about wearing long strings with shiny satin dresses for the evening, à la Raquel Welch.

Style Notes: Diane von Furstenberg's wrap dress has moments in and out of the trend spotlight, but it forever remains a true staple in anyone's arsenal. Here is the designer wearing her classic creation way back in 1973.

Style Notes: Is it just us, or are these outfits everything you'd like to wear to work? Plain midi dresses, slouchy boots and tonal colours are all on our radar for spring. Call your friends, and tell them the news.

Style Notes: There are countless cool-girl trends one can chart back to Debbie Harry (her back catalogue of outfits is a treasure trove), but how much would you pay to get your mitts on this Blondie slogan knit right now? We know. A lot.

Style Notes: Slinky "naked" dresses have been present through the 20th century, but there's something about a boudoir-inspired satin slip that feels A) very '70s and B) very much like something we'll be wearing this summer.

Style Notes: While the pantsuit wavers in and out of popularity, right now, it's big business for retailers and the streets of fashion week. Bianca Jagger will forever be one of the original trouser-wearing icons—just look at this necktied all-white getup for proof.

See how to wear a trouser suit.

Style Notes: We noticed recently that much of Cher's '70s and '80s style looks strikingly similar to that of Bella Hadid's 2017 wardrobe, but let's not stop there. Cher's easy, breezy, co-ord pictured here is the ideal summer outfit. 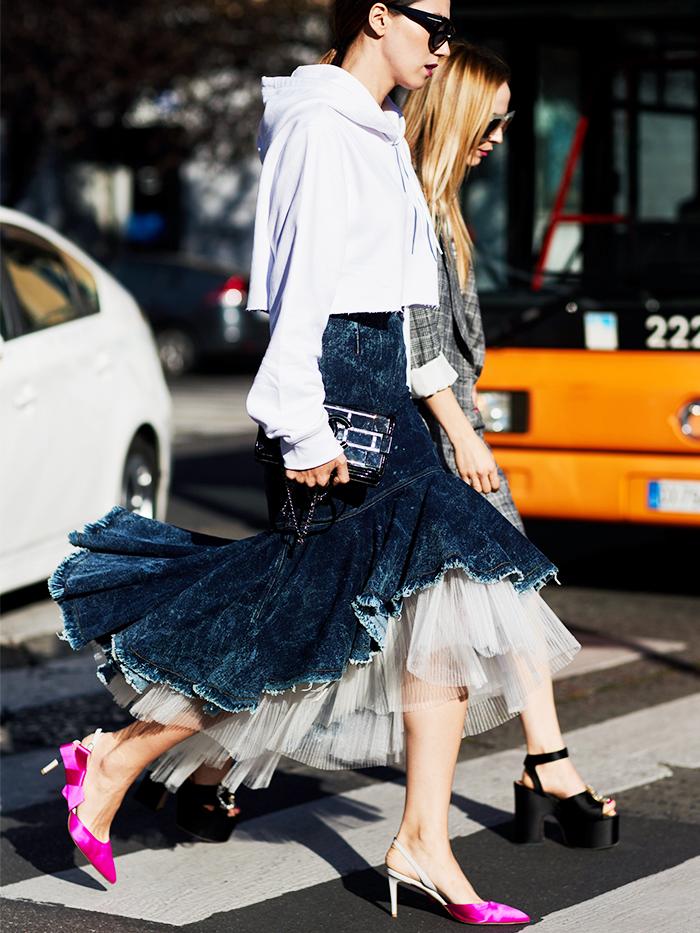 Style Notes: Not only are these '70s boots the right kind of pull-on, mid-heel style to fit into today's current OTK demands, but they're also in white, making them doubly covetable.

Check out our edit of the most flattering OTK boots.

Style Notes: The power of the denim dress lives on. Whether you wear yours short and cheeky with matching platforms like this '70s model did, or you decide to opt for something more demure, the simple use of this humble fabric can make any frock seem easier to wear.

The 1970s can be instantly recognisable from one item: platform shoes. Whether glam-rock in metallic leathers or in simpler sandal form, this stacked footwear dominated the decade.

Style Notes: The '70s wouldn't be anything without their freedom-fighting hippies, and it just so happens that Jane Fonda was part of the club. Here, she's wearing a Thea Porter dress—this designer's seminal creations are still adored by boho girls like Kate Moss today.

Style Notes: Jane Birkin spent much of the '70s not really wearing much clothing at all, but she did always have her trusty basket bag nearby. Over the past few summers, we've seen these traditional woven holdalls make their way back into fashion to become the bag to wear every summer.

Style Notes: Every time designers present their summer collections, you can bet safari references will be present. It all started, of course, with Yves Saint Laurent. Here, his muse, Betty Catroux, models the famous safari dress in 1969—a look that would rule during the first part of the following decade.

Style Notes: Where would today's best-accessorised outfits be without scarves? Nowhere, that's where. They were very popular in the '70s, topping off many a look, including this Dior one.

Style Notes: Marisa Berenson's silky pyjama tunic, culottes and matching scarf look precisely like pieces we'd wear around the house or for an intimate dinner. Paired with gold sandals and a shoulder-robed coat, this glam look hasn't dated from when it was captured in 1974.

Elizabeth Taylor has been fabulous at all times in her life, but the 1970s were a particularly OTT time for her (and then-partner, Richard Burton). Here, we have a spectacular lesson in making an entrance: Wear a bright-pink gown with excess beading and a truckload of diamonds and pearls.

In the '70s, tie-dye and crochet were all the rage, and many dresses featured both trends in one. This shot of Rock Hudson with a group of women (don't ask me what it's about—I don't know) showcases the looks in all their glory.

Donna Summer was the queen of disco, and her stage looks have set the scene for many a pop diva to come. This feathered-coat-and-leotard combination wouldn't be out of place at a Beyoncé concert today.

Here's Joanna Lumley looking all kinds of lovely in a green floral wrap dress. Enjoying the matching green shoes too.

To really complete the bohemian look, you need jewellery. Here is Ali MacGraw showing us how it's all done by pairing multiple hippy, collected-from-around-the-world (probably) necklaces with her handkerchief-hem dress.

Next up, the biggest autumn/winter 2021 fashion trends to know.